Here's a creative and fun music video by Philly-based hip-hop artist Legrand that is exemplary for a number of reasons. First off, fun song! Secondly, created as a collaboration between Legrand and a group of 20 students at the Tokyo campus of Temple University, it's an interesting example of what can be accomplished using fairly accessible desktop and online tools, collaborating across great distances.

Really clever! Congrats to everyone involved. More on how it was produced after the jump… 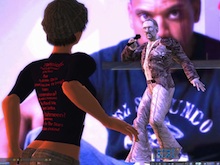 Students from the Japan Campus ofTemple University challenge
the music business status quo as they release a music video they produced for
Philadelphia-based independent hip hop artist Legrand this week.

In a class experiment that’s already been called “revolutionary,”
20 students from the Tokyo campus of Philadelphia-based Temple University have
worked for 4 months with independent hip hop artist Legrand to design, produce
and promote a music video for his new single “Virtual Love.” Teasers for the
video have spread like wildfire on youtube since last Sunday, and the full
video is due to hit the video portal on Friday, July 9th.

The video is like OK Go meets Kanye West on skype. Designed
as a single shot, it is entirely recorded as a continuous computer screen
capture, where all sequences are triggered in realtime synchrony with the
music. It starts with a seemingly harmless click of the Play button in the
music production software, launching the track. Then all hell breaks loose.
E-mails are sent and received, windows and applications pop up in frantic
rhythm; the rapper calls on skype just in synch for the break; tweets update
live by hip hop celebrities, video shout-outs are sent from famous youtubers who
join in for the chorus, in an unprecedented social media chain reaction
culminating in a Second-Life live concert and the computer, quite simply, shuts
down on the resulting chaos, leaving the viewer panting.

The video took four months to produce, and used the skills
of 20 college seniors, as varied as computer majors who hacked the twitter
application programming interface, art students who designed texture maps for
the 3-D Second-Life avatars, to film students who edited the takes and
marketing students who wrote… well, what you’ve been reading here thank you
very much.

To tell the truth, this was a production not many
independent artists could afford – if it wasn’t non-profit. As it is, the
project is a bold statement about the current landscape of the music industry
and college education. With diminishing prospects of investment from major
production companies, and increasingly complicated technical skills required in
their projects, DIY artists lack the time and resources to be there for their
fans. The rapid pace of change has increased the pressure on university
programs like that at Temple University, Japan Campus, making it increasingly
harder to anticipate where the industry is headed and challenging professors to
figure out how best to prepare students. Student-run projects such as “Virtual
Love” can develop tech-savvy, crowd-wise initiatives in a way that’s well
suited to the needs of independent musicians: cheap, quick and playful.
Students can – literally, trade this for a learning experience that is amazing:
working with a real artist, with a real career, real music, and real audiences.

Temple University, Japan Campus (Abbreviated: TUJ) is an
international campus of Temple University in Philadelphia, Pennsylvania,
located in Tokyo, Japan. It is the oldest and largest campus of any foreign
university in Japan, with an estimated 1,286 matriculated students, of which
approximately one-half are Japanese and one-half are from the US.
(http://www.tuj.ac.jp)

The project took place as part of the undergraduate class
“Introduction to cybermedia”, in Temple’s Department of Broadcasting,
Telecommunications and Mass Media, School of Communications and Theatre. The
class was taught by professor JJ Aucouturier, an Assistant Professor of
Computer Science and former music researcher at Sony
(http://jj-aucouturier.info).

Hip hop artist Legrand is an independent musician based in
Philadelphia, Pennsylvania. He has opened for De La Soul, Busta Rhymes and
toured internationally. His most recent album, The Professional, is distributed
by Internet Records. (http://www.reverbnation.com/legrand)