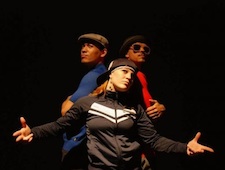 This weekend I had the pleasure of seeing “Swift Solos” – a new dance theater show based on the life and legacy of legendary b-boy Ken Swift. I found it to be a dramatic departure from the typical b-boy and hip-hop dance theater shows that I've seen. In a nutshell, “Swift Solos” is about the experience of being a street dancer, as told through the eyes of one of its earliest innovators, as well as the perspective of the dancers who were inspired by him.

Six young dancers – two b-girls and four b-boys – from a variety of ethnic backgrounds, plus Ken Swift himself, perform tirelessly for the 90 minute show at the Dance Theater Workshop in Manhattan. "Swift Solos" was a rousing kick-off to the 2010 Hip-hop Theater Festival.

Other shows and movies I've seen are much more didactic about the dancer experience – with monologues by dancers about how they got started, arguments with parents about how they would never amount to anything, angsting about not being accepted by the “dance world,” etc.

“Swift Solos” is much more than just a hagiography or a retrospective — although that would certainly be awesome. Indeed, the show gives almost no information at all about Ken Swift, his upbringing, how he got started, or his many accomplishments. Ken Swift himself is never acknowledged by the other dancers, slipping across the stage at odd moments and silently judging a battle. The message seemed to me to be: this is not about one man, but about the experience of being a street dancer.

For example, there's a fun piece about kung fu's influence on b-boying. It opens with scenes from a super-cheesy kung fu movie – the kind that a New York teen in the 1970s might have spent his weekends watching at the local cinema. After this, the dancers enact a series of interpretations of kung fu movement, as filtered through b-boying. It all has a childish, joyful quality, like kids re-enacting their favorite fight scenes on the playground.

Another fun sequence has three dancers watching old clips of Ken Swift dancing — which are as rare as jewels — and then re-enacting their favorite parts on stage.  It's a neat trick, showing how the modern b-boy movement owes so much to online videos as a way of transmitting knowledge and inspiration.

The overall quality of the dancing was so different from watching slick, polished routines by Quest Crew or the LXD. Instead of each dance being setups for a series of death defying tricks and powermoves, there was a simplicity and a playfulness about the dancer's movements. The dance vocabulary was straight up old skool b-boying: apaches, backspins, knee sweeps, chair freezes, and ceces, for those in the know. The attitude was joyful and loose, rather than aggressive and too-cool-for-school. It's the kind of feeling and style that I aspire to in my own b-boying.

The staging was very slight, relying on a set of six square wooden platforms that the dancers reconfigured in various patterns for the different pieces. It reminded me of the cardboard boxes the b-boys used to throw down on the pavement so they could break. But they also served a more practical purpose, as my dancer friend Emily pointed out; the marley floor was too sticky for a lot of the b-boy moves that require a certain amount of slickness, like handglides and headspins.

The final piece has the breakers tell the audience why they break. “I break to express love for myself, for others and for God.” “I break, because it's the only thing I'm good at.” It's a refreshing portrayal of b-boying that goes beyond the swagger and bluster.

At our show, there was a fun cypher at the end, with audience members young and old coming up to dance with the performers. I've never seen such an intergenerational b-boy cypher before in my life, with paunchy middle-aged dudes trading moves with toddlers. A perfect finish to this kinder, more inclusive presentation of b-boy culture.

[Thanks for BreakerNYC.com for the tickets to see this show, which I won on their raffle!]