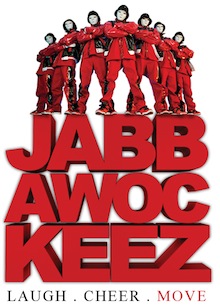 On Sunday night, I finally got to see the Jabbawockeez live dance show "MUS.I.C" in Las Vegas. My mind is still kind of blown.

The Jabbawockeez are a hip-hop dance crew that has elevated to craft into something beyond the artform. Their central conceit is that they always dance wearing white masks and identical outfits.  You would think this would mean that their dance is about uniformity and robot-like precision.  In fact the opposite is the case.

The crew members have explained that they wear masks so that you have to rely entirely on their movements to communicate and express themselves, not their faces.  Their dancing is something like mime, Noh theater, and Buster Keaton-esque comedy combined.

Their well-known routines up to this point are 3-5 minute numbers choreographed to a particular pop song.  You can see a lot of their most famous routines on YouTube, often with millions of views.

So how do you translate these short pieces into a cohesive 90 minute Vegas show? I guess I was going to find out. Other dance shows fill out the time by creating some throughline of a plot, perhaps involving the evolution of one dancer, or how a group came together, some kind of dance drama.  See for reference "Swift Solos," the Groovaloos, and "Ballerina Who Loves B-Boy."

The Jabbawockeez show has almost no plot to speak of.  The only distinguishing character is a janitor Wockee who interacts with the crowd before the show, and then sort of bumbles his way through the routines with the other Wockeez.  At some point there are ninjas.  That's about it.

Instead what you get is a series of dance routines interspersed with comedic numbers and some audience interactions, presumably to give the dancers time to breath and change costumes.  But they also serve to cleanse the mental palate so you are ready for the next dance assault.

And yet it works.  The different acts effectively combine different kinds of music — modern pop music, old classics, rock, emo, electronica, and of course lots of hip-hop.  The use of the stage, props, lighting, digital effects, and smoke helps add to the excitement.

The act that is the biggest crowd pleaser is a tour through the history of dance.  They take it all the way back to James Brown, Michael Jackson, Vanilla Ice, even Back Street Boys.  Oh, and of course, "Single Ladies"…

I was happy to see a crowded theater on the Sunday night that I was there.  There were some older folks, families with kids — a more diverse audience than I would expect for a hip-hop dance show.  I think that the Jabbawockeez show is so different from the other cabaret, comedy, magic and the 16 different Cirque du Soleil shows that its attracting a lot of people.  In short, it's hella fresh!

It's pretty incredible since these are just local boys from the Bay Area and Sacramento, many of them Filipino.  The kind of young men I and  my cousins might have gone to school with, played ball with, and invited over for family parties and picnics.

So to see these dancers make it in the big time — in Vegas — on their own terms, is really inspiring.  They aren't backing up some other rap act, they aren't trying to star in commercials (although they do that too), they are actually practicing their artform with their own music for hundreds of paying customers every night. Amazing.

I do have to wonder how long they can keep it up.  It looks like some punishing routines that they are putting their bodies through every night.  But then I realized that the use of the masks is kind of brilliant.  Because like the Blue Man Group, they can easily swap out understudies and other dancers as long as they can do the routines.  Just don't take the masks off.

In sum, "MUS.I.C" is the best damn hip-hop dance show I have ever seen. By all means, see it if you can.  I'd see it again in a second.  That's me excitedly doing a freeze in front of one of the Jabbawockeez signs after the show.

(Big ups to my cousin Zan for getting me the hook-up on the tickets!)

1 thought on “Jabbawockeez on the Vegas Strip: Making Incredible “MUS.I.C” with their Bodies (review)”