The "Big Apple" circle dance is one of those lindy hop traditions that I never got on the bandwagon about, despite seeing it performed countless times in my 13 years of lindy hopping.  Last night, I finally got the wherewithal to learn the full choreography and performed it with twenty or so others at the 9:20 Special in San Francisco.  It was my little way of honoring the memory of Frankie Manning, the man who choreographed this version of the dance and did much for lindy hop in general, and whose birthday is on May 26.

The origin's of the dance are obscure. But popular opinion is that "The Big Apple" came, not from New York City, from the "Big Apple Dance Club" in South Carolina, a swingin' dance spot for African-Americans in the 1930s, that became popular with white students in the area.  The dance grew in popularity and then exploded when Frankie Manning choreographed a version of the "Big Apple" for his dance troupe "Whiteys Lindy Hoppers."

Frankie's version of the "Big Apple" (shown above) is the one that is celebrated and performed regularly around the world.  Just two weeks ago I saw it performed in Seoul, Korea at a dance club called "The Big Apple"! There are a bunch of reasons why it took me 13 years to learn it. Partly it's just laziness on my part.  It's not the easiest choreography to learn, with dozens of traditional jazz steps, breaks and complicated rhthyms and syncopations.  It was easier to focus on the much easier line dances like the Jitterbug Stroll, the Shim Sham and the Madison.

Also when I was coming up as a dancer, the Big Apple wasn't very well known or performed, except by the group "the Big Apple Lindy Hoppers," which Frankie worked with.  So it just wasn't part of the skill set of what my friends were learning at the time.

I'm not sure that my ability to learn choreography has improved that much over the years. But the way that I approach complicated steps like "the Big Apple" has grown quite a bit.

Being in class these past two weeks with several other people learning "The Big Apple" reminded me about how much has changed for me.  Many of the younger dancers are hungry to learn how to dance.  You can see it in their eyes, in their postures, in their energy they bring into the room.

At the same time, you can see other people in the class (mostly older) who look defeated before the class has even begun.  They are jockeying to be at the back of the class, looking around nervously, awkwardly standing there like they are about to be tested.

Not long ago, that was me.

But I remember something that my friend Manu Smith told me at the Herrang Dance Camp a couple of years ago that stuck with.  It was after a really difficult class with two of biggest "rock stars" in the lindy hop scene. I was barely keeping up with the material, and struggled through each combination.  Even some of the other swing instructors in the class you could see concentrating hard and making mistakes.

"How the fuck am I supposed to learn this if Skye is having problems?" I remember thinking to myself.

Manu and I talked about the class later. I was cursing out the instructors for going so fast and not breaking down the steps better. Manu agreed to some extent, but then he said,

In other words, often we defeat ourselves before we have even tried.

My own mantra when dealing with a difficult dance class is to say, "I'm going to get 75% of this and not worry about the rest."  Not as good as "I WILL get this." But it keeps me from totally giving up.

I think it's partly an age thing. An 18-year old is going to be able to more swiftly learn and reproduce steps than a 40 year old. Their minds are more agile, they bodies are more capable in general.

But there's also a lot of mindfuckery involved as well, that you can build up and whine louder as you get older:

Which brings me to the point of why we are doing the Big Apple in the first place.  Frankie Manning never stopped learning and growing as a dancer.  Even in his 90s, Frankie continued to appreciate and celebrate all of the things that younger dancers were bringing to the dance, while also humbly sharing what he knew about swing with everyone he could.

Frankie Manning made mistakes. He wasn't know for being a flawless dancer; he was known for being a fearless and endlessly creative dancer. He would forget his own steps, or lose count, or just stumble at times. And whenever he did, he would just laugh, make a funny comment, and keep going.

So to truly honor and celebrate Frankie, I am going to set aside my own internal bullshit and just focus on the joy of dancing, of discovery, of making mistakes, and even falling down.  That's the gift that Frankie gave to me, and that I am going to give back to everyone else, in whatever I am doing, on the dance floor or off. 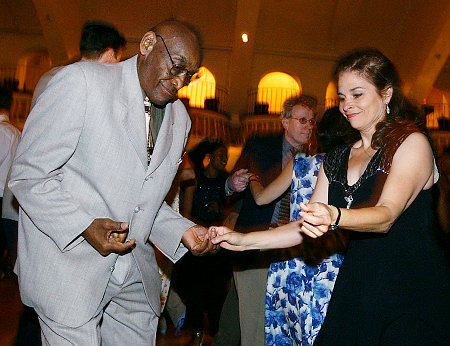 NOTE: Big thanks to awesome "Big Apple" instructors Ann Mony and Ryan Calloway of 9:20 Special. They offer regular swing dance instruction every Thursday for every level of dancer, from first timer to old timer.