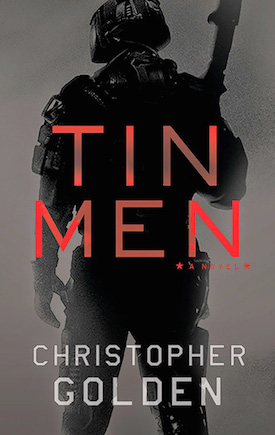 "Tin Men" by Christopher Golden (2015, Ballantine) shouldn't work as a novel. Golden combines the current geopolitical landscape with a somewhat plausible extrapolation of the US as the "world's policeman" and near-future drone technology. I read the book synopsis in the library and thought it just sounded overstuffed and dry.

"Tin Men" is anything but dry. This is my first book in a long while that was the literary equivalent of a roller-coaster ride. It felt like I was reading the scifi version of "Black Hawk Down" — unrelenting, brutal, and chaotic action. Several times I was going to start to read it before bed and had to stop myself because not only was it hard to stop reading, but also I got so amped up from the action it was hard to fall asleep.

The book centers around the story of one platoon of the "Remote Infantry Corps," elite drones piloted by American soldiers from a distant military facility. Thousands of these drones are deployed all around the world keeping the peace in various hotspots, from the Korean border to Somalia to Syria, where the action in the novel begins. While a semi-stable world peace has been established by the RIC, a global coalition of anti-American forces are determined to take down the drones… and their pilots.

That's all I'll reveal about the plot, which sounds clunky even as I write this. As a fan of military scifi, I found the book engrossing and thrilling from beginning to end. There's interesting moral quandaries that the soldiers wrestle with piloting "unkillable" robots amidst poor and desperate populations. The line between first-person-shooter and peacekeeper gets blurred by the soldiers piloting the drones, who are virtually faceless and anonymous.

The heart of the book are the heart-pounding action sequences pitting robot super-soldiers against merciless guerillas in Damascus, Syria, and later Israel and Athens. Golden does a great job showing the firefights from the soldiers' perspectives, with command structures and strategy often taking a backseat to chaotic bursts of violence.

It's a bleak and dystopian take on the world the is not far from our own, but populated with characters that care for each other and are thoughtful about the bigger picture of their actions.

"Tin Men" isn't a perfect book. I found the technology of the robots somewhat under-explained and unclear, particularly their weaponry and capabilities. The fact that they exclusively used hand weapons I thought was an odd choice and never really discussed, even as their enemies had more powerful means of assault.

There are a lot of characters to juggle in the story, and I sometimes felt a little lost, trying to remember which soldier was which. And the motivation and actions of the principal antagonist were not consistent throughout the book.

But overall "Tin Men" far surpassed my expectations. If you are a fan of military scifi, or just military fiction in general, you should read "Tin Men." Even if you aren't, there are some interesting things that the book has to say about identity and technology, the ethics of military drones, and our reliance / dependence on technology to function as a society.

By the way, "Tin Men" already has a film deal with Warner Brothers. But don't wait for the movie, read it now!

SIDENOTE: "Tin Men" was the first e-book that I checked out from my local library. I'm pretty excited about having access to thousands of free e-books for my Kindle and highly encourage everyone to visit their local library's website to see what media you can borrow. It's pretty amazing what you can get from the San Francisco Public Library online!