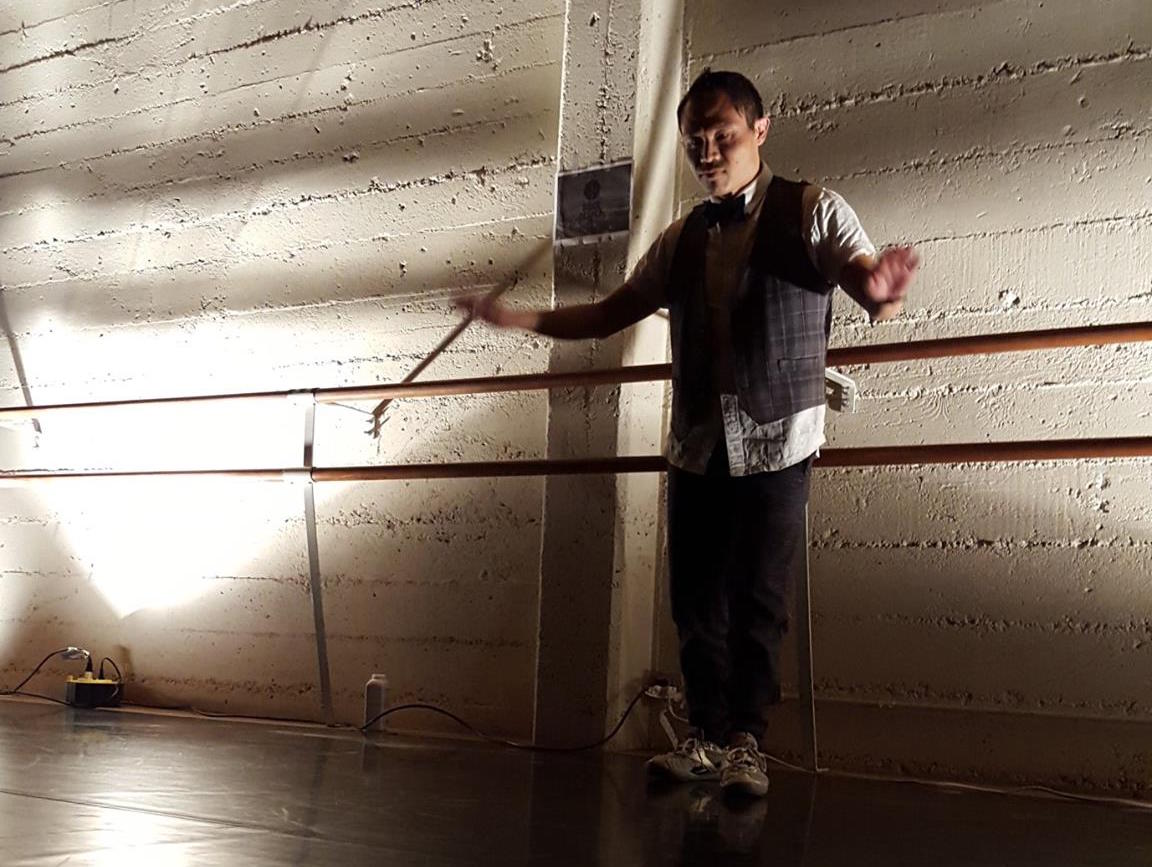 About a six months ago, I went to a street dance performance and thought to myself, “I should do this.” It was called “Diggs Deeper,” a unique dance performance series that is now in several cities around the country.

Six months later, I did it. Here’s how I got there.

Diggs Deeper is a non-profit whose mission is to provide “a ground for artists to be fully self-expressed, to surface awareness and acknowledgement of culture, and to bring individuals into leadership.”  This video gives a nice overview of the focus and intention of Diggs Deeper.

What I like about Diggs Deeper is prohibition on the recording of video of the performances. I feel like this emphasizes the immediacy and uniqueness of this moment in time, rather than on some imagined future or audience. It’s all about what is happening right in front of you, with these people, right now.
I also like the focus on freestyle, e.g. non-choreographed dance. Ideally this can lead to more authentic expression and emotion, rather than just canned movement. And it makes it a more welcoming space for dope dancers who aren’t necessarily all that great at memorizing combinations and choreo (like me).
Diggs Deeper seems like a middle ground between a staged performance and just busting it out on the dance floor in a casual cypher. For someone who struggles with performance and being the focus of attention as a dancer, I thought it would be a great place to face and conquer that fear.

First off, I want to recognize the apparent contradiction of preparing to dance freestyle. How do you get ready to be spontaneous? Actually there’s quite a bit you can do, which is in some ways more challenging than memorizing some set choreo. Here’s roughly the process that I followed. Maybe some of you will find it helpful if you perform or want to get better at freestyling.

Commit to Do It

The first step to getting on stage was committing to doing it. At the second Diggs Deeper I attended, I put my name on the list to perform for a future show. And more importantly, I told some of my dance friends that I was going to do it. That was my first big hurdle, publicly stating that I was going to perform, which made it a real thing.
After that I spent a couple of months ideating different concepts for what I wanted to perform. More than anything, I wanted to do something that brought together the different strains of music, culture and dance that I were a part of my personal journey — swing jazz, lindy hop, breaking, popping, and house.

What song to dance to is really important, of course. I went back and forth between traditional jazz, NOLA funk, contemporary jazz, electro-swing, and jazz house. But in the end, I settled on a classic favorite of mine, Ella Fitzgerald’s 1967 recording of “It Don’t Mean a Thing” performed live with the Duke Ellington Orchestra in France. Here it is, if you haven’t heard it.
Listen to this amazingness. It starts off quietly with just the piano. You can hear the crowd the background, clapping, shouting, laughing. Then the drum kicks in. And then Ella starts: “It don’t mean a thing… if it ain’t got that swing. Do wah do wah do wah do wah do wah do wah.” She laughs at the end of the line while others in the band call out to her. I imagine her looking back at the musicians and just cracking up.
Ella then dives right in with a scat solo after the chorus that shows she’s not messing around.  The song just gets crazier and crazier for the next five minutes, building and building until you think it can’t build anymore, and then it keeps going.
My goal was just to express what this song makes me feel — the joy, the swingin groove, and the explosive energy.
So now that I had a song, how do I prepare to do a freestyle, unchoreographed performance to it?  Here’s some of the stuff I did to prepare.

Take Care of the Body

In order to perform, I wanted to be in as peak form as possible, so I had the stamina, strength and energy to do whatever I wanted to do on stage. So I’ve been:

This of course was not just for this performance, it has been part of a series of health interventions and experiments that I’ve been doing over the past year or so. And it’s been paying off a lot lately.

A big step for me is just feeling more comfortable being the focus of attention. So if I’m at a club or a dance and a cypher or a jam breaks out, I try as much as possible to go in and do my thing.
There’s so many factors that go through your head when you are deciding whether or not to go into a cypher — Is this the right song? Am I as good as other dancers going in? Am I busting into a cypher among a set group of friends or a crew? Does my style fit this song? Etcetera, ad nauseum. You can easily psych yourself out so much that you never go in.
And the mindfuckery doesn’t stop once you actually decide to go into the jam. Then you have to decide how long to stay in, what moves make sense to this song, what to do if the DJ shifts from a trance-y house number to a 90s hip-hop jam. Worst case, you brainfart in the middle of your solo and can’t think of what to do next.
Junious Brickhouse, the house dance legend from DC, has a whole talk about how when you cypher you need to be able to (1) know and focus on your dance intention, (2) acknowledge other people around you, and (3) put them aside and do YOU. (Or as Martha Graham would say, “Keep the channel open.”) When It’s something I’ve taken to heart and has helped me bust through my own mental blocks and just dance.
So, I cyphered as much as I could over the past few months. I went to dance classes that had a cypher at the end of class (super easy and fun.) I organized cyphers when my friends and I got together to practice. And of course when I was in a club and there was a cypher, I tried to go in if at all possible.

Lastly, I wanted to make sure that I had at my disposal as diverse a toolset as possible to draw from when I was performing. I worked on my handstand, my b-boy freezes, my house dolphin dives, solo jazz trick steps and drops, popping, floating, and even some vogueing and waacking.
The goals  was not to do all of those things during my performance. It was to have a wide variety of steps and moves available to me if I wanted to bust them out.  Here’s me working on my terrible version of “skating,” which is a fiendishly difficult house dance step.
Here’s Jardy Santiago showing how to actually skate, for reference.
Other steps to prepare that were important:

The night of the event, I made sure and show up early. I wanted to warm up, to get a feel for the space, and to dance a little before I was on.  I checked in with the organizer Joseph to see where I was at in the line-up and make sure that there wasn’t anything in particular that I need to know about the event or the space that night.
We had communicated earlier about the performance order and I had stated my preference to be in the earlier side, but not first. That seemed like the best place for me so I didn’t have too much time to feel nervous before my performance, but also to see a couple other pieces first and get inspired and amped. Luckily, Joseph was able to accommodate my request and I was fourth on the line-up that evening. Perfect!
For those that have never been, Diggs Deeper is different from other dance shows in that it is basically just a bunch of dancers squatting on the floor in a semi-circle, in a dance studio space with dim lighting. The “stage” is really just a lighted circle you step into when your name gets called. You have two to five minutes to do your thing, and then you are out. That’s it.
I felt a mixture of excitement and nervousness and happiness right before I was called up. This was the moment I had been preparing for. I stood up and walked into the light. 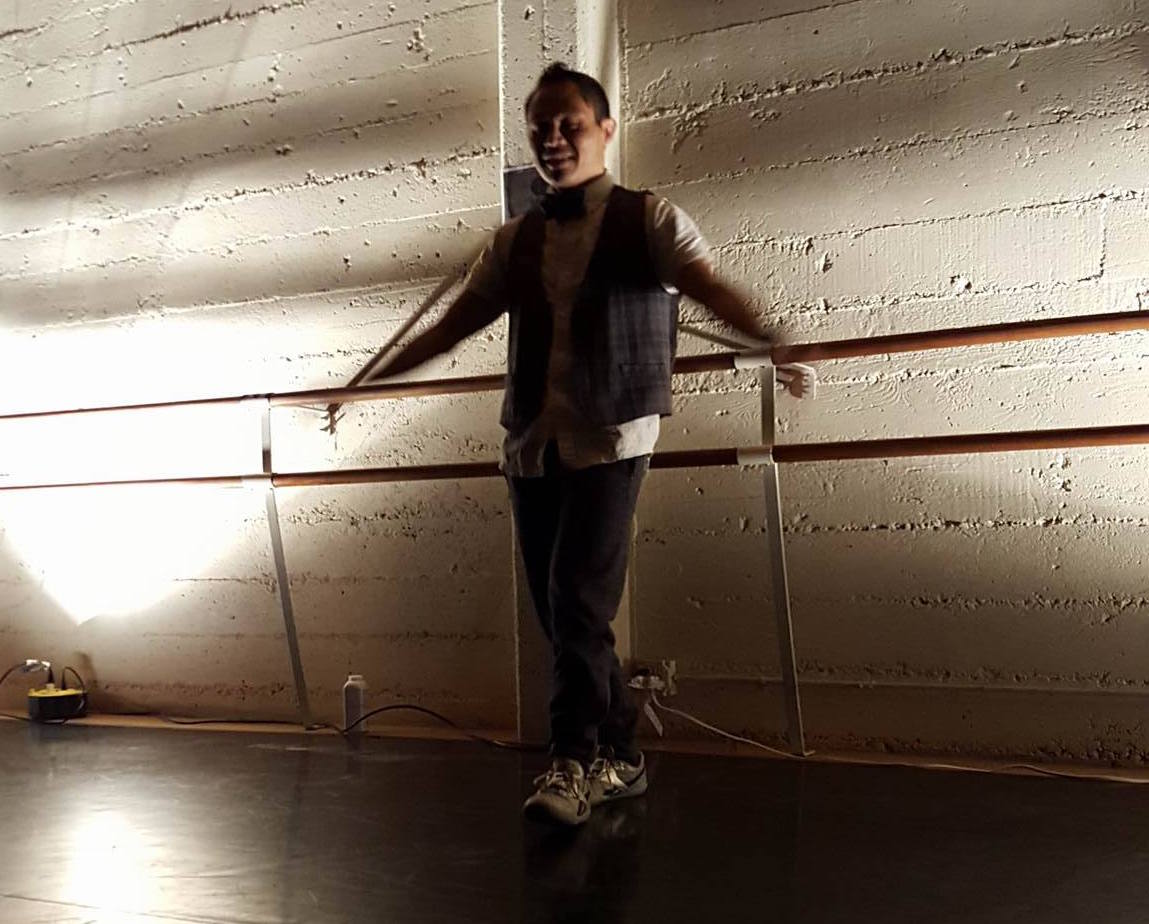 I made sure that I had a moment to breath and look out to the audience. I saw a sea of beautiful faces smiling back at me, including several friends from both my lindy hop and house dance worlds. I went over to my buddy Manu and his son Micah and gave them both a high five and a smile.
And then Ella came on.
I put into practice what Junious taught me: put the audience aside and just do me. 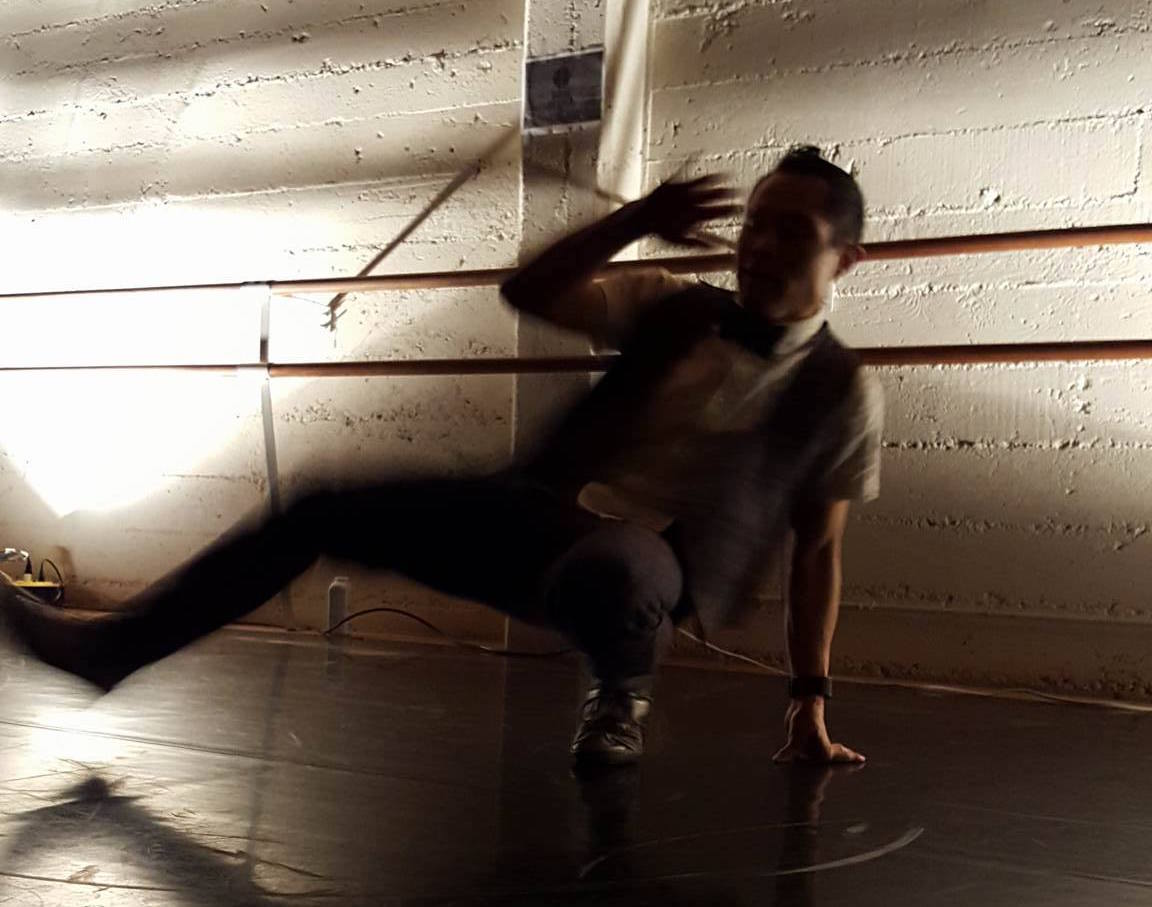 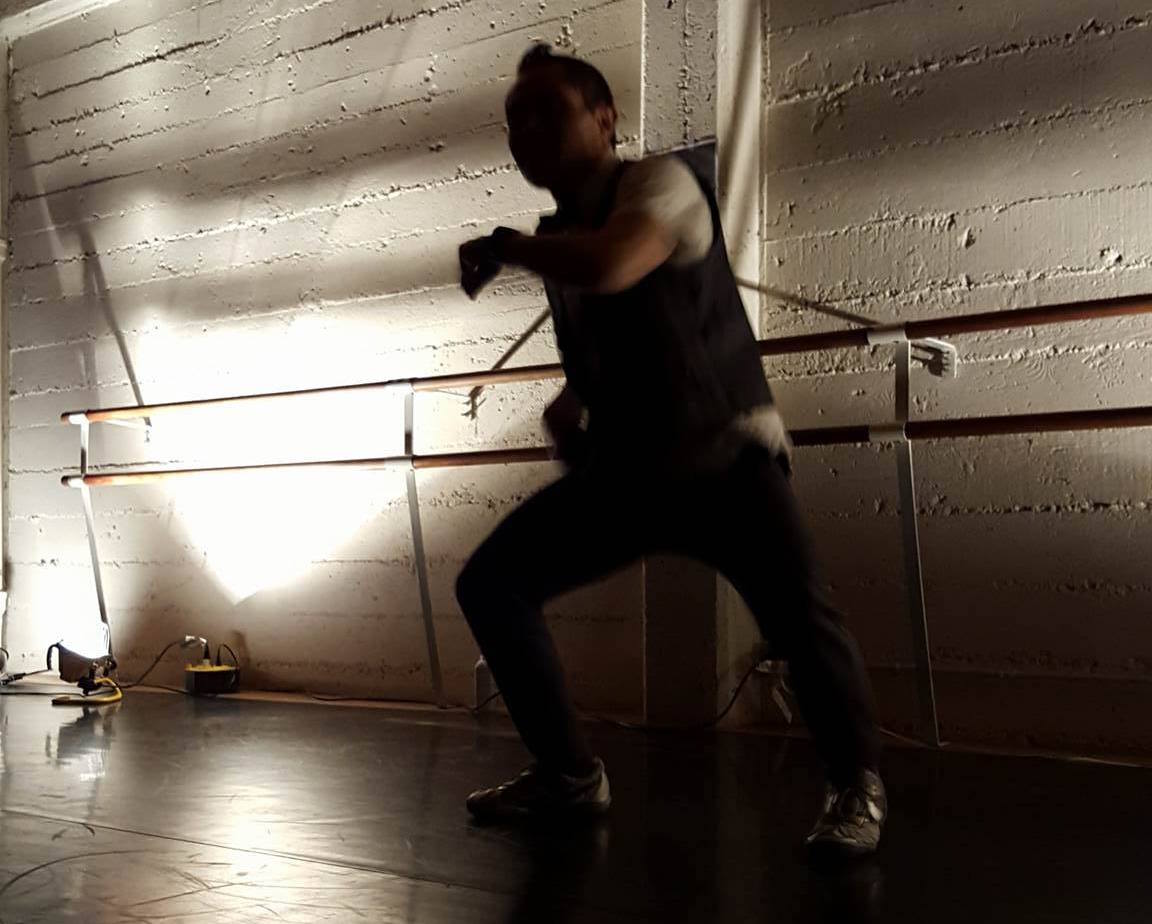 And then, three minutes or so later, I felt like I had said what I wanted to say. I made my way to center stage and took a bow as everyone cheered and applauded. In retrospect, I think I had at least another minute or so of dancing in me. But I’m satisfied with what I presented and shared.

Doing this was a really great experience for me as a dancer. I’m still not a natural performer, but I feel like I’ve come a long ways in being able to express myself through my dancing. I’ve gotten better at quieting that inner critic and letting the music and the emotion take over. I’m getting more and more comfortable with just doing me.