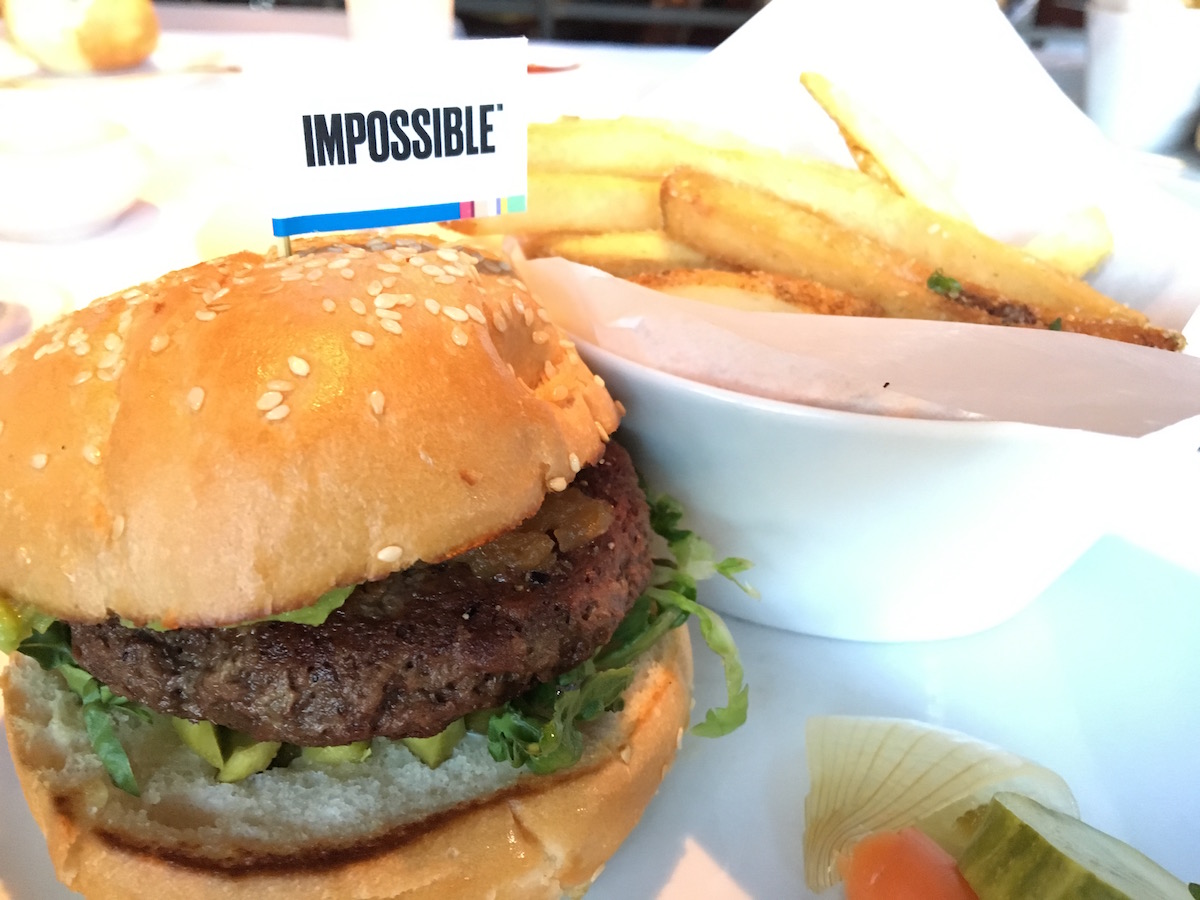 On Thursday, some friends and I got together to try out the famous "Impossible Burger" at French bistro Jardiniere in Hayes Valley. The Impossible Burger is the first of what a startup hopes will be the mainstream consumption of vegan alternatives to beef. A very laudable goal, but will it convince a burger-obsessed generation to go veggie?

Touted as the most "meat-like" veggie burger, the Impossible Burger contains heme, a molecule found in hemoglobin (a component of blood), as well as in certain plants. Potatoes are used for the crunchy exterior, and coconut oil for its fat. Several food blogs report that the veggie burger is supposed to "bleed" like a real burger, which sounds both kind of gross and fascinating.

More importantly, the burger cuts down on the disastrous environmental impact of raising cattle. According to Impossible Burger founder Pat Brown, the burgers uses only one quarter of the water to produce a beef burger, and one twentieth the land area. That's very exciting to me, as someone who gave up beef a couple of years ago for this very reason.

Jardiniere is a lovely setting to eat America's favorite fast food. Very San Francisco fancy-casual: elegant table settings, exposed brick, an elaborate round bar, muted lighting. Service is attentive and unpretentious. We made clear that we were there for the burger, easily the cheapest thing on the menu, and everyone took it in stride. We even got a great table on the second floor, which I did not expect.

But what about the actual burger? It looks very promising, as you can see from the picture about. Served simply with just some carmelized onions, pickles, vegan aioli, and avocado, it comes with a cup of yummy fries.

Well…. okay I gotta be real, people. The "Impossible Burger" was very good, but not great.

The patty had a lot of the right mouthfeel and texture of beef. Pulling it apart, it has the right density and simulates well the sinews and nodules of flesh. The color is quite close to what real cooked meat looks like. But it lacked the juiciness and moistness that exemplifies a tasty burger. It didn't bleed at all. All of my companions and I agreed that it was fine, but not mind-blowing. One of us joked that perhaps we should have ordered it "rare."

Yes, it's the best veggie burger I've ever had. But I'm not sure that it would woo any avowed carnivore from choosing it over a real hamburger. Then again the price point of $16 is quite reasonable for a fancy burger you would find at any other restaurant in San Francisco. Perhaps I had my expectations set too high?

Afterwards, my companions and I moved on to Chez Maman for dessert and tea around the corner. Chez Maman also is famous for its burger. Although we were all quite full, we did fantasize for a moment about splitting a real hamburger from there. That's probably not a good sign.

Still, I wish Impossible Burger all the best. Resetting America's obsession with beef, and meat in general, toward more sustainable and healthy eating is definitely a goal that I wholeheartedly support. It's an interesting strategy to play toward what we already love — greasy fast foods — rather than get us eating more tofu and salad. They may be right that that is the best pathway toward widestream adoption in this country. If it comes with a side of fries, I'm totally in.