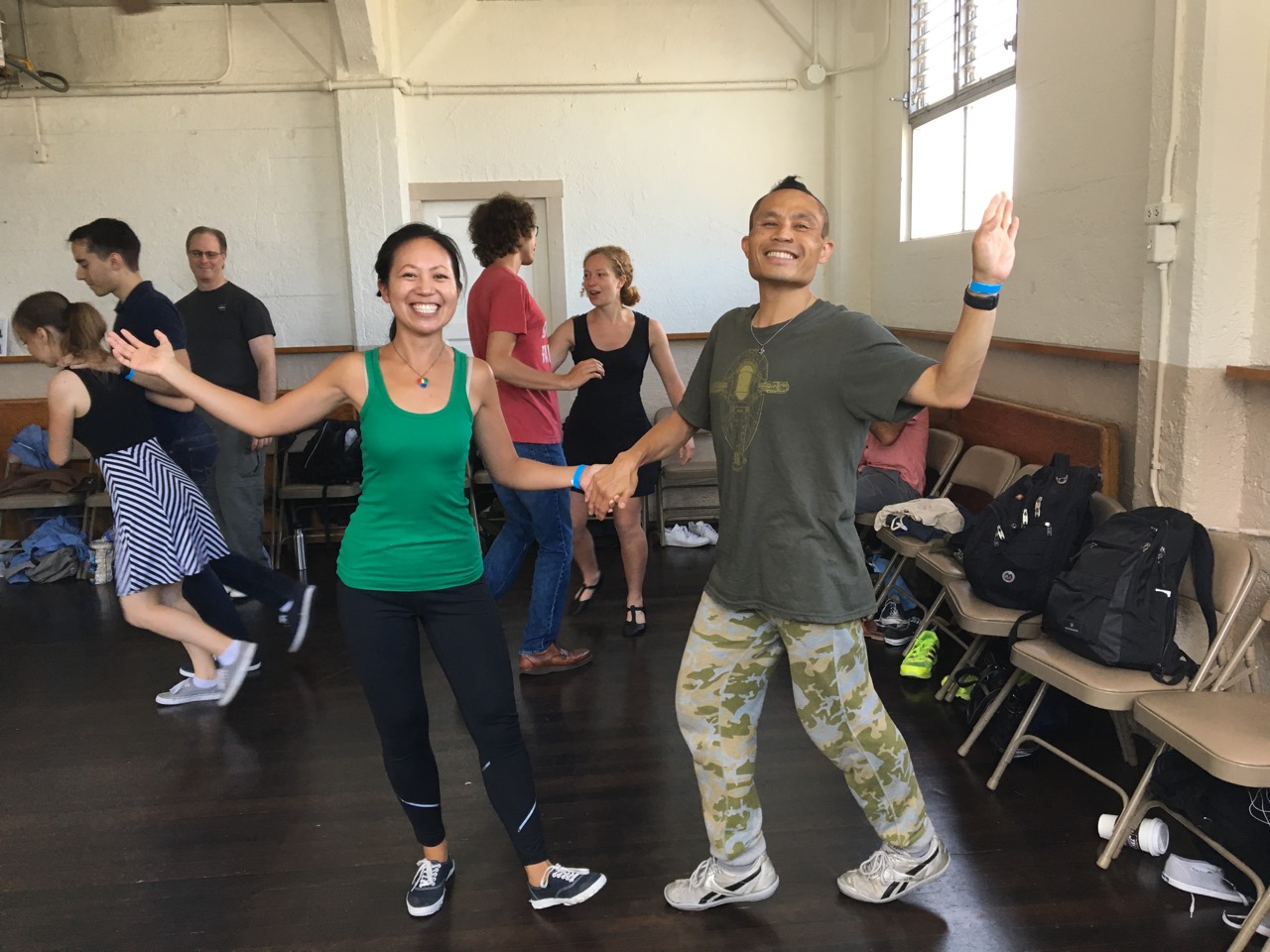 I am a terrible follower. And I love it.

A couple of weekends ago, I got to work on learning the other side of lindy hop, the follower role, at The Switch Workshop in San Francisco. The Switch is one of the first full weekend dance workshops dedicated to focus on learning the non-traditional role and "ambidancestrous" (both roles) dancing. The weekend featured dance classes with expert instructors, open practice sessions, dancing to DJed and live music, and ambi-dance competitions.

In the Focus track, we had two sets of awesome instructors: Ann Mony with Laura Glaess and Adam Brozowski with Rafal Pustelny. The instructors did a great job at tailoring the experience for people who were comfortable with one of the roles in lindy hop, but completely new or unfamiliar with the other role.

Ann and Laura emphasized that their goal was to give us the tools to feel comfortable enough dancing the other role that we had it in our pocket for when we wanted to use it. So if there was a birthday jam, and a friend was in it, we felt like we could jump in, no matter that person's role preference. Or if there were too many follows or leads, we could choose to dance the other role so we got more dances in. That made a lot of sense to me.

The first day of workshops, you could see the stress and anxiety of the students on their faces and in their bodies. There was lots of nervous chatter in between the periods of practice. We were all struggling along together. For me, I was focusing on listening to my partner, providing the right frame to be led easily, pulsing, and not second-guessing what was going to be led next. It was really hard, but good hard.

Adam and Rafal had us do a really interesting exercise where the followers were just walking forward and backward, and the leaders were changing the followers direction by absorbing their weight and redirecting it gently in the other direction. This idea of absorbing and redirecting helped immensely when we got to the swingout toward the end of the day.

My big achievement on the first day was being able to somewhat successfully follow a swingout. It felt fantastic.

The second day, you could feel the students relaxing more into the roles. There was more smiling, less scowling, and people were holding less tension in their bodies. Ann and Laura upped the tempos and has us dancing more charleston movement, which was a lot of fun. I actually never really learned "the chase" entry to front-to-back charleston, so it was super useful for me as a follow and a lead.

But of course, the goal was not to dance in a class, but to successfully assume the role in a social dance. The evening dances were designed to support people dancing whatever role they wanted to. People were given buttons to wear indicating what role(s) they wished to play. And we were encouraged to ask the person what role they wanted to play before dancing, instead of assuming.

I tried to equally follow and lead most of the night. Several of my best dances were switch dances, where we traded the follow and the lead when we felt like it. And dancing with old friends but in a different role was such a weird and neat experience for both us.

I had a fantastic switch dance with my friend Shawn on the first night that was a revelation for me, since we have similar dance backgrounds and energy. It was like a whole new side of the dance had opened up for me that I had never experienced. Honestly, I wish we had done the switchly comp together.

Here's a bit of me following with my friend Calvin.

Watching the dance competitions was a super fun part of the weekend. Seeing people competing in the "mix and match" comp, where they were randomly paired with another dancer, and had to switch roles during the dance, was really neat to watch. I can't imagine how difficult that was to judge though!

And the "switchly" strictly competition, where you got to choose your partner but still were expected to switch roles during the dance, was so inspiring. All the dancers danced their hearts out, and looked like they were having a blast. Here's the winning couple, Lori and Kevin, just killing it!

I enjoy being a total beginner at something — confronting those feelings of uncertainty, instability, and embracing being completely out of your element. I love it so much.

Learning to follow in lindy hop is different. I've been dancing this dance for nearly 20 years. So to suddenly be terrible again, doing something that normally feels like breathing, is a new and exciting experience for me. It's like re-learning the thing that I love so much, but from a completely new perspective. And one that enriches and deepens the role I know so well. I can't wait to learn more.

At the last dance on Sunday I spent some time just watching the social dancing. Looking out on the dance floor, and seeing a crowd of dancers of every possible combination — women leading and men following, women dancing together, men dancing together, couples switching mid-song — was just a beautiful sight. I felt like I was seeing the future of lindy hop.

Congrats to the organizers of a great workshop weekend. Can't wait for The Switch 2018!