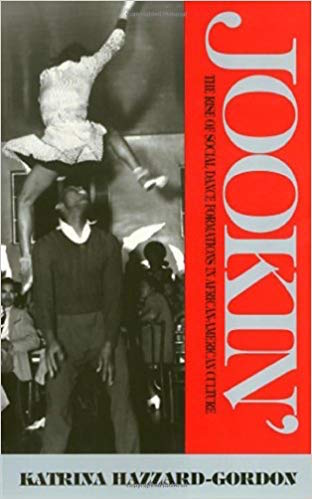 I just finished reading Jookin’ : The Rise of Social Dance Formations in African American Culture by Katrina Hazzard-Gordon. It describes in compelling detail on the ways that African slaves and African Americans found to create their own social spaces in a society that actively prohibited their association.

The focus of Jookin’ is on social dance spaces, which the author calls “Jooks.” These run the unsanctioned-sanctioned continuum from jook joints, to honky-tonks, after-hours clubs, rent parties, membership clubs, and nightclubs / cabarets. These were Black established spaces that allowed them to freely associate, hook up, and engage in activities they could not do elsewhere including dancing, gambling, and imbibing liquor.

For the dance historian, much less emphasis is placed on the nature or descriptions of the dances that took place in those establishments. Most of the discussion centers around the transition from sacred / religious dance to secular dance, as African traditions morphed into African American ones. The most detailed descriptions relate to African American social spaces in Cleveland, where the author is based.

The book is a quick and engaging read. Definitely helped me understand better the evolving nature of Black civil society and how dance has always been an integral part of that. Recommended.