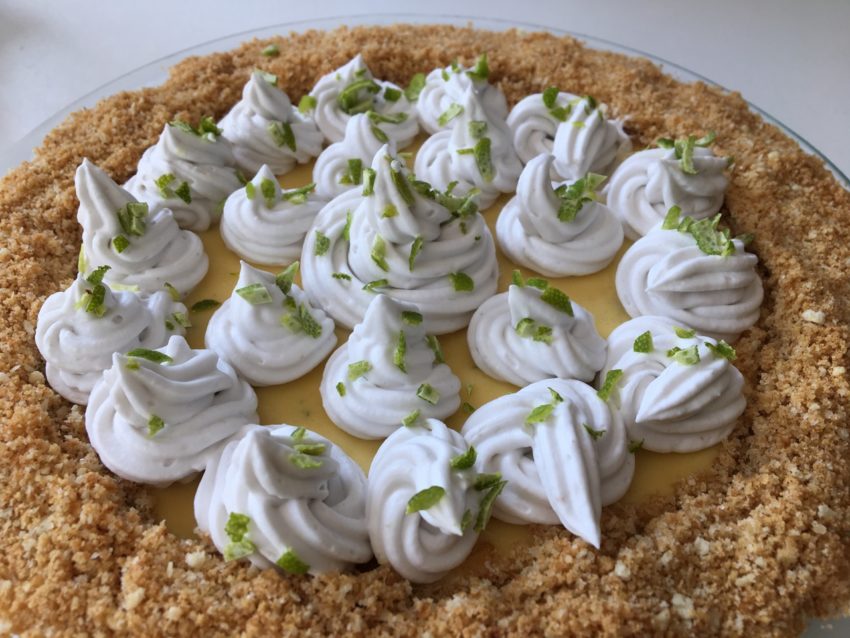 I’ve been dreaming about this pie for about a year, and finally got around to working on it this past month. Calamansi is a lime used in a lot of Filipino cooking, almost exclusively savory dishes, as far as I know. But I thought it work work well as a variant on key lime pie.

Finding fresh calamansi is not possible around here in San Francisco, unless you know someone who has a tree. Apparently it’s quite challenging to cultivate in this climate? And most of the Asian grocery stores I hit up had not heard of it.

The calamansi filling is based on the Bon Appetit recipe for key lime pie, with a couple of variations. I think I’ve settled on about a 1/2 cup of calamansi juice as about the right level of sourness, plus a bit of lime zest, balanced with the sweetened condensed milk.

I experimented with a few kinds of crusts. I landed on a combination graham cracker + saltine crust, which combines the texture and sweetness of graham cracker with the saltiness and texture of the saltines. I tried cutting out some of the sugar, but doesn’t bind as well to the pan, and comes out quite salty.

Put saltines and graham crackers into food processor. You might have to do them in batches. Pulse a 8-12 times to get them nicely and crumbly. You shouldn’t have any large chunks of cracker left.

Add the melted butter and sugar and pulse another 7-8 times to combine.

Put mixture into a 9-inch pie tin and press down with the back of a 1-cup measuring cup, shaping the edges with your hands. You want the whole thing to be pretty densely packed and thick, so it retains its shape after baking.

Chill for 10 minutes to harden the butter a bit.

Bake at 325 for about 12 minutes till it is golden brown.

Remove from oven to chill while you make the rest.

Using an electric mixer on medium speed, beat egg yolks and condensed milk in a large bowl until paler and almost doubled in volume, about 5 minutes.

Pour into cooled crust. Bake pie until filling no longer jiggles and is starting to slightly puff around the edges, 15–20 minutes. Let cool completely.

Remove the coconut cream or milk from the fridge without tipping or shaking and remove the lid. Scrape out the top, thickened cream and leave the liquid behind (reserve for use in smoothies).

Place hardened cream in your chilled mixing bowl. Beat for 1-2 minutes with a mixer until creamy. Then add powdered sugar and mix until creamy and smooth – about 1 minute. Taste and adjust sweetness as needed.

Put on top of pie and sprinkle with lime zest for color.