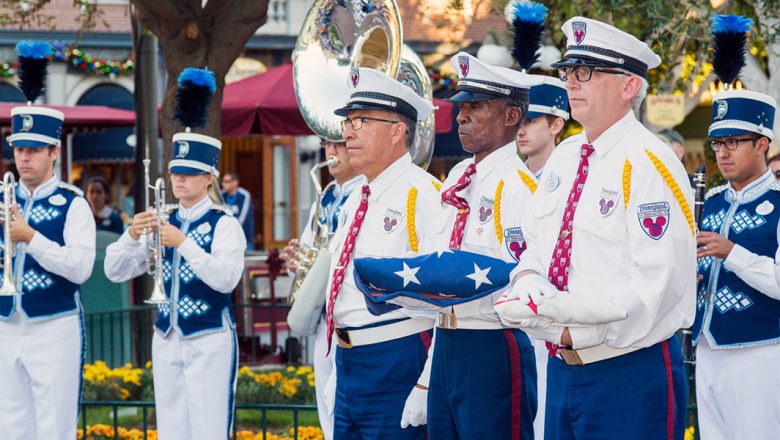 One of the most surprisingly moving things I experienced at Disneyland this weekend was the “Retiring of the Flag” ceremony at sunset. I happened to be on Main Street headed to California Adventure when I heard the Disneyland Brass Band and the Dapper Dans all performing together American patriotic music.

Curious, I stopped by a small circle of people listening respectfully to the music, around the flags of the United States and California.

Afterwards, an announcer on the loudspeaker invited current and former members of the different armed forces to step forward into the circle to be recognized. As the Army, Navy, Air Force, Marines and Coast Guard were called, different snippets of speeches were played by JFK, MLK and others. It was quite solemn and powerful.

Then a three-person honor guard of Disneyland security marched forward and ceremonially took down the flags, carefully folding them, and marching out.

So interesting participating in such a serious, solemn undertaking in the midst of all the frivolity of the theme park. But still somehow fitting.