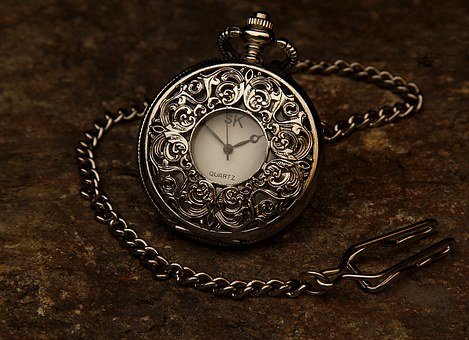 NARRATOR: When last we left Herfordshire resident Charles, he had left his granddad’s beloved pocket watch for the expert restorers in the Repair Shop. But can master watch maker Stephen fix this prized heirloom?

STEPHEN: Hi Charles, good to see again. So… I won’t keep you in suspense. Here it is.

CHARLES: Well this is incredible. I can’t believe it. It looks… brand new!

STEPHEN: Yeah, about that….

STEPHEN: It IS brand new. We just bought it. Down the road. At a Daiso.

STEPHEN: It’s a Japanese chain store that sells really cheap shite. Like this pocket watch. Cost me five quid. I think the kids use it for cosplaying? Not really sure.

CHARLES: So… this ISN’T my granddad’s 1920s era Swiss artisan-made pocket watch that was given to him by his Uncle Wallace before he left for the war?

STEPHEN: Nope. This is a cheap knock off. Just like the one you brought us three weeks ago.

CHARLES: What do you mean?

STEPHEN: Did you notice how the watch that you thought was your granddad’s prized pocket watch looked a bit off from what you remember as a child? It’s probably because it wasn’t the original one.

CHARLES So what happened to that one?

STEPHEN: Who knows? It probably broke at some point and he decided to just get a new one. Perhaps he wasn’t sentimental about old things. Some people are like that, you know.

CHARLES So… are you saying I should take this brand new pocket watch and pretend that it’s the one that my grand dad used to remember him by?

STEPHEN: I mean, I suppose you could. Or… you could find other ways to remember the old guy. Cause at the end of the day, the watch…. is just a thing. But it isn’t your grand dad.

STEPHEN: You see, we take all these old objects — a turn of the century Raggedy Anne doll, a Turkish coffee grinder from 1912, a shawl that your great aunt Matilda wore in the 70s — and we imbue them with talismanic properties. But these objects are not our loved ones. They are just … objects.

STEPHEN: These artifacts are just a tool to hold on to loved ones who have past … but there are lots of ways to do that…. ways that don’t involve countless hours of difficult work and thousands of pounds of expenses. We can remember them every time we play their favorite song, or eat a sausage roll that they loved, or watch Liverpool get trounced by Manchester.

CHARLES: Well… thank you, I guess. You’ve given me a lot to think about.

NARRATOR: Join us next week as the Jay closes the shop for an all-staff where everyone talks about whether there is any point to their life’s work. On… the Repair Shop!