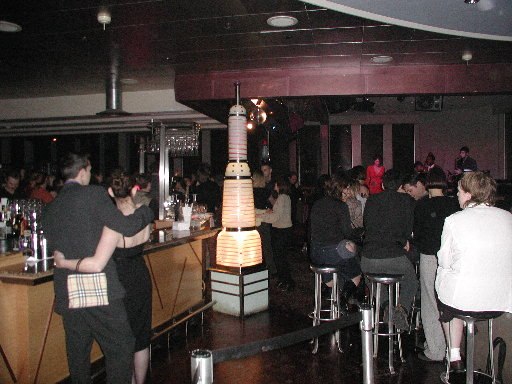 The year 2001 was height of the neo-swing era in New York City. There were bars and clubs everywhere offering live swing music and dancing. Young lindy hoppers like me would cruise around the city, going from venue to venue, drunk on this music and this dance that was all around us.

There were a bunch of venues that were at the top of my list then:

But one of my favorite spots was at the top of the World Trade Center, the humbly named “Greatest Bar on Earth.”

On Fridays, we’d gather at the base of the WTC North Tower to pay the $5 cover charge and take a long elevator ride 107 floors up to the top. I remember the feeling of excitement and anticipation during that elevator ride, fussing with my outfit, making sure I had my dance bag with my Capezio dance shoes and water bottle, checking out the attire of other passengers to see who was part of the “swing crowd” and who were just tourists. Poodle skirt — check. Bowling shirt- check. Fedora – check.

The doors would finally ding open and we’d make a beeline for the bar, the sound of jazz and jump blues calling to us. You’d turn a corner and enter into a crowded bar scene, wending your way through the crowd to the front, where the band was playing.

The band stand was so tiny — barely room for four musicians.

We’d drop our bags by the bandstand, greet our friends, and immediately start to dance like maniacs. Most of us were not very good, but we made up for our lack of skill with sheer enthusiasm and energy.

The small dance floor was always packed and we were constantly bumping into each other. We’d curse the tourists for taking up valuable dance floor space, holding their handbags and expensive cocktails. There was always some jerk throwing his poor partner around, endangering everyone. It was just mayhem.

During band breaks, we’d chat and wander around the bar. We’d press our faces up against the glass and look out on the rest of the city.

The last time I danced at the World Trade Center was in June 2001. Ron Sunshine and his band were playing a free concert in the plaza.  I remember taking a breather in-between dances, looking up at the towers and thinking about how lucky I was to live in New York.

Twenty years later, there’s a lot I could focus on about that horrible day. But I’m going to choose to center the millions of moments of joy, laughter, kindness, and love that happened in that spot. I’m so grateful to the bar and waitstaff — including the 72 who perished that day — who made those magic moments happen for us all.

Twenty years later, on the other side of the country, I’m still lindy hopping. I’m so thankful for every opportunity I’ve had to dance, even on top of the World Trade Center.

Also check out my friend Chris Orbach’s post about dancing at the Greatest Bar on Earth: “Last Dance At Windows.”

5 thoughts on “Dancing on Top of the World: Remembering the World Trade Center”