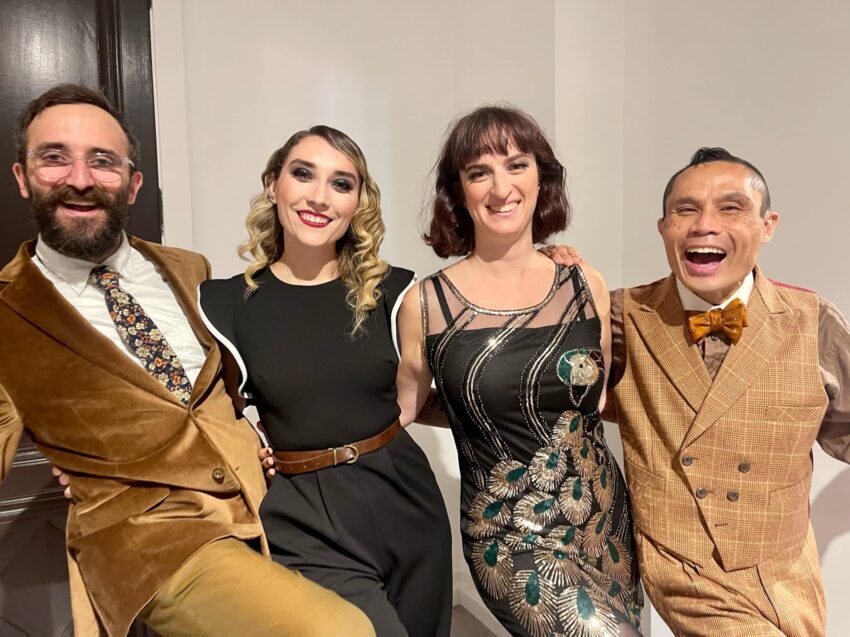 I can’t believe I just did a dance gig at a freaking fashion show where I threw down solo jazz, charleston and hat tricks?!? And I managed not to drop the hat???

It all started when Sarah Bush, a dancer / choreographer / dance troupe founder I know, contacted me about a possible gig about a month ago. I’m not dancing professionally anymore, so I was ready to say “no thank you.” But I’ve been trying to be more open to opportunities to share my artistic journey with others, so I let her pitch the idea to me.

After hearing about it, the gig sounded like the perfect event for me — a fashion show with the theme of “1920s Meets Technology.” Retro-futurism has always been one of my favorite things! And I’ve actually never been to an actual fashion show.

That said, Sarah also wanted me to incorporate hat tricks into my performance, which is a new skill I’ve been working on lately. I know just a handful of tricks, which I can pull off maybe 20-60% of the time. But I said I would try.

Sarah caught me at an interesting time in my dance journey. While I have been dancing for decades, performing for an audience has never really been a strong interest of mine. I dance mainly as an emotional release for myself and to be connected to a dance community. But honestly in the past two years, because of rhythm skating and social media, I’ve become more and more focused on performing for an audience, both virtually and in person.

Seeing my social media reach grow from a few friends to hundreds and even thousands of people has made more aware of what I’m presenting, and more thoughtful about creating content that speaks to an audience. For a lot of my other dancing that I’ve done — lindy hop, breaking, popping, house — I’ve had a conflicted relationship to being in the spotlight. Despite decades of experience, the cypher still intimidates me.

But with rhythm skating, I’ve been finding my joy in being the center of attention. It might be just a 30 second reel on my Instagram or a little jam skate routine that I bust out at the rink. But for that moment, I’ve been embracing performing for an audience. And it feels awesome.

So the idea of presenting one of my oldest artistic passions — lindy hop — with my newest — hat tricks — on an unfamiliar stage sounded like a dope challenge.

Sarah also wanted a few more lindy hop dancers to do additional short pieces during the show. Finding swing dancers who were available, interested, and could commit 6-10 hours for a performance was pretty tough! But I managed to recruit my friends Hanah and Ryan, plus another dancer Trê for the gig.

And then it was showtime!

It was so interesting seeing the tiny army it takes to put on a fashion show. We were just a tiny part of a larger production, that included AV, staging, costumes, makeup and hair, models, designers, security, photographers, and more. All we had to think about was the few minutes we were on stage, which was already a lot to plan for and process.

Fortunately we had enough time to test out the stage and runway, do quick run throughs of our pieces to the music, review our costumes, plan for entries and exits, and deal with all the other logistical minutiae before the actual show.

And all that planning paid off as everyone pulled of their performances with style and pinache. I think the crowd dug what we brought to the space, and Sarah seemed pleased. Honestly it was one of the funnest performances I’ve ever done. And a good reminder about why I still love lindy hop and vernacular jazz — the joy, deep history, elegance, and playfulness.

I’m proud of what we accomplished and just feel so fortunate for opportunities like this in my very improbable dance journey.