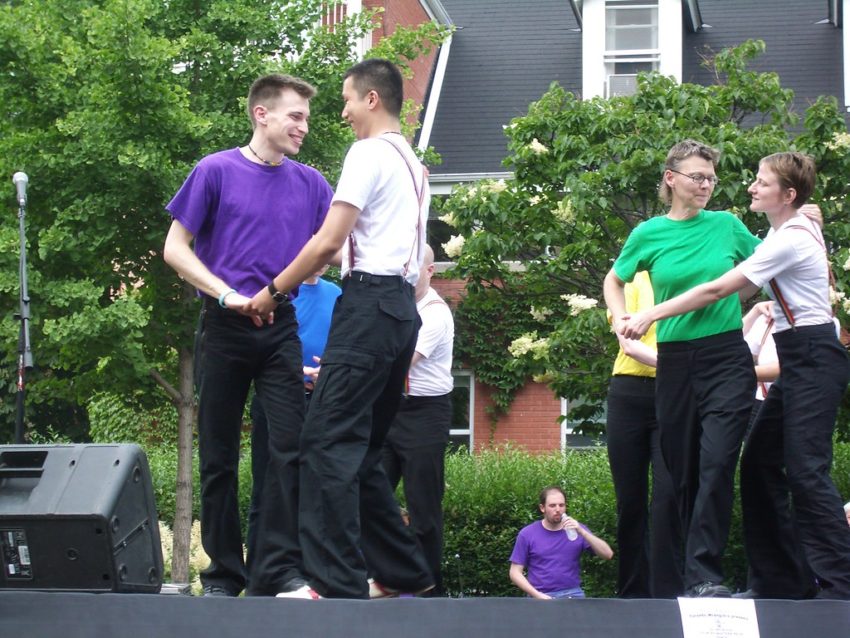 I’ve heard that there are a couple of lindy hoppers who are working on creating a LGBTQ-friendly swing and blues dance in New York City, which I say is long past due.  Other places like San Francisco and Toronto have had long-standing queer-friendly swing dances for years and years.  Given the large gay population in New York, and the large percentage of gay folk who like to dance, this just makes so much sense.

That said, it’s not clear to me how this will play out in the NYC lindy community.

Lindy hop is of course a vernacular social dance that carries with it the mores of the era from whence is was created: the 1920s-1940s.  Back then, it was clearly understood that the men led the dance and the women followed. That said, women leading women was apparently not uncommon, as this 1939 footage shows. And you can see Al Minns and Leon James dancing together at the 2:30 mark of this badass dance showcase. But beyond these exceptions, it was generally accepted that the male was in the “leadership” role and the female in the “follower” role.

And so it is to this day.  At every swing dance you go to anywhere on the planet, 99% of the dance community follows these gender roles.

There are a couple of possible responses to this situation:

It looks like the organizers of this new NYC dance are seeking a middle path: creating an alternative space that is open to alternatives to the dominant gender roles.  I’m curious to see what happens, and supportive of the effort.  Frankly, I think that the lindy hop community has to evolve our definitions of “leader” and “follower” in order for it to survive and remain viable as a dance form.

One recent incident brought the issue home for me.

I was in a swing class with a bunch of beginner and intermediate dancers learning about connection and lindy frame.  The male instructor happened to know one of the male dancers who liked to lead and follow (or was “ambidancestrous” as another dancer Mary Christenson coined to me.)  So the instructor asked the male dancer to be his dance partner, to demonstrate a move for the class.

“Cool,” I thought. “This will be help people to be more open-minded about dance roles and gender roles.”

There were also a couple of female leads in the class, which added some nice diversity, I observed.

This was all well and good, except that for the entire class, the instructor kept referring to the leads as “gentlemen” and the followers as “ladies.”  Even when he was dancing with another guy, he would say, “And ladies, I want you to do the following….”

And then he would refer to the leads by saying, “Gentlemen, here’s some of what I’m seeing.”  This, despite that fact that there were two female leads.

It was just… weird and awkward.

Now I’m not saying the instructor was sexist.  But he was perhaps being less mindful of how language informs and reinforces specific gender roles and heirarchies.  I have to imagine what a transgender person or just a straight guy who likes to follow would feel like.  They would feel like they were doing dancing lindy hop wrong.

From a historic perspective, lindy hop has always challenged the mores of its day. The Savoy Ballroom was one of the first integrated dancefloors in the country where blacks and whites could socialize and dance together freely.  Lindy combines elements of various cultures — from African dance to tap and ballroom — into something uniquely American. Swing has always been about freedom and joyful abandon.

In 2010, it should be a welcoming space for people of any sexual orientation or identity.

Thanks to the nice folks at SwingingOUT in Toronto for letting me use the pic above.  Check out their website and more photos at http://www.swinginout.ca.