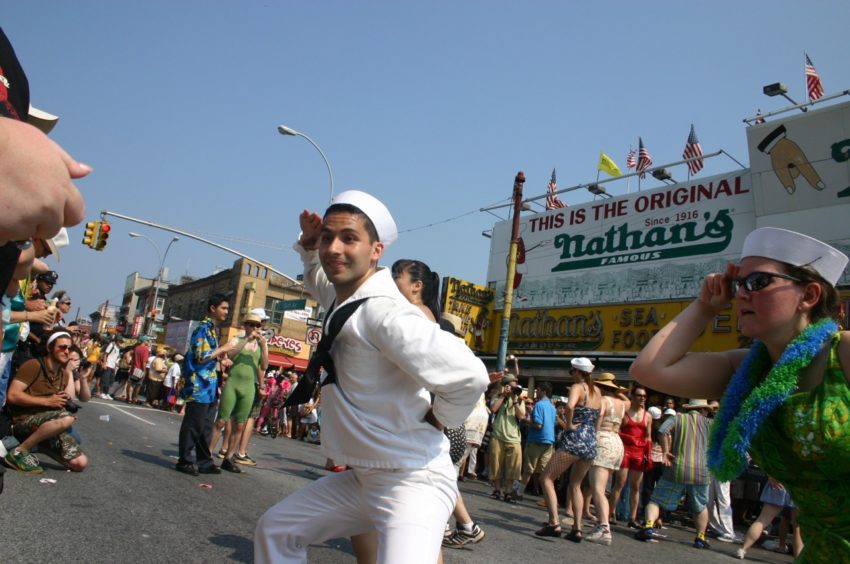 I’ve got a few accolades under my belt. But this award for best marching group at the Coney Island Mermaid Parade in 2001 might be one of my most treasured wins of all time.

This was the astounding result of one of my few experiences as a dance choreographer, in the early years of the Brooklyn Bombshells Revue in the Mermaid Parade.

For those that haven’t experienced it, the Coney Island Mermaid Parade is the largest art parade in the world. A joyous celebration of all things nautical, the Mermaid Parade is the official opening of Coney Island for the summer season. Hundreds of participants dress in their most mermaid-inspired outfits to parade down Surf Avenue, cheered on by thousands of cheering onlookers. It’s one of the best things about summer in New York City.

By 2001, swing dancers had already been getting together to “march” together in the Coney Island Mermaid Parade for a few years. Prior to this, I recall it being a fairly disorganized affair — basically just an MP3 player hooked up to an amp and swing dancers randomly showing up to social dance together on the boardwalk. It was really just an excuse to dress weirdly in a vaguely nautical-themed costume and dance in front of thousands of parade viewers on a beautiful summer day by the beach. Nothing wrong with that, and not unlike lots of other “marching groups” in the parade.

But in 2001, we decided we wanted to be a bit more organized. So my friend Tomo and I threw together a pretty simple choreography, with the knowledge that lots of people would be learning it on the fly the morning of the parade, or even during the parade. Thankfully, there is no video of that choreography that exists, as far as I know, so in my mind it’s just the most amazing dance performance ever.

Anyway, it was clearly enough for us to take away the win for Best Marching Group that year!

This is just one small memory among 13 years of marching in the Coney Island Mermaid Parade with the Brooklyn Bombshells between 1998 and 2011. As the years progressed, our group grew from a handful of swing dancers to a small army of lindy hoppers led by the intrepid team of Heather Flock and Amy Jacobus — our Queen Mermaids, if you will.

Under their benevolent reign, the Brooklyn Bombshells became the winningest group to ever march in the Mermaid Parade.

Sadly, it looks like the Bombshells might be retired, from a recent announcement from the organizers. So I’ve been filled with all sorts of nostalgia and bittersweet feelings. Here are some of my favorite memories from more than a decade of being in the parade with this amazing group.

Here’s one of my earliest, and favorite pics of all time of the Brooklyn Bombshells. We’re dancing right in front of Nathan’s Famous Hot Dogs, and we’re just having a blast.

Here’s the lovely Cindy with the cutest merperson ever. One of the best parts of being in the Mermaid Parade is how much love and adoration you get from the thousands of bystanders. Families and groups come up to you asking for a picture. Kids gape at you with wide-eyed wonder. It’s just the best feeling.

Some fun pics of the Bombshells in action. John is just the best lobster.

A wonderful year at the Parade. We were afraid this was going to be the last Mermaid Parade ever, so we gave it our all.

I love this pic from 2007 of my friends Tomo, Sammy and Beckto as sexy sailors.

Here’s Tomo and I dancing together that same year. (Keep it classy, Rik.)

Thankfully, 2007 was not the end of the Mermaid Parade. Some of my recollections from that day.

This was one of my favorite year’s ever at the Mermaid Parade, mostly because it almost didn’t happen. The weather forecast was for heavy rains that day, so we cancelled our performance. And then… the weather started to clear and some of us showed up anyway. And it was freaking amazing.

Here’s me, soaking wet and so happy.

Even getting waylaid by pirates didn’t spoil the day.

Another great year at the Parade, another win. This was actually my last year participating in Mermaid as a NYC resident. I soon after moved back to the Bay Area, so it was bittersweet.

Here’s a fun action picture of me doing a leapfrog.

Here’s my lovely friend Voon and I dancing together.

I’m a nerd that year. I guess?

By 2011, I was already living in San Francisco. But I just couldn’t resist making a last minute trip to NYC to participate in the parade one more time. It helped that I found the perfect costume when I was in Singapore earlier that year: an actual Singaporean sailor’s uniform!

Miriam and I throwing down on the boardwalk.

The whole crew that year.

Sigh, so many wonderful memories. I’m sad that it looks like the Brooklyn Bombshell Revue is over. But all good things, as they say.

That said, it’s been years since I’ve been a part of this. Here’s a pic from the group from 2017. While I am far away, it still feels like family to me. When I see these pictures, I’m just transported to that magical time by the seashore, doing what I love best.

Thanks, Amy and Heather for making all of these treasured memories happen for so many of us over the years. You should be so proud of your achievement. Go, Bombshells!